This review of Alana Kennedy’s exhibition Orpheus Diningroom Project MMX was written by Georgina Lee for her blog Not-Quite-Critics.  See it in its original context here.

Who: Alana Kennedy
What: Orpheus Diningroom Project MMX
Where: fortyfivedownstairs, 45 Flinders Lane, Melbourne 3000
When: Until 25 September 2010

When my friend Sarah alerted me to this exhibition opening, I just knew I had to go! Normally I wouldn’t be able to do anything on Tuesday nights as we have class at the VCA, but fortyfivedownstairs is literally a 1 minute walk from my office (not even) and it was perfectly convenient to pop into before class.

When I entered the gallery I was greeted by free flowing wine and gorgeous macarons wrapped up in mini cones using pages from the book, The Mystical Hymns of Orpheus. I gobbled mine up pretty quickly! They were absolutely delicious and were made by none other than the master chocolatier from Shocolate, which is my favourite chocolate cafe in Melbourne (conveniently located right near my house!).

To my right, in a smaller room, a large dark wooden oval dining table was set up with two chairs facing each other on opposite ends. On the table were about 200 adorable macarons placed in a pattern of two large intersecting circles.

At first I thought this might be the vesica piscis, but the circumferences of the circles do not touch the centre of the other circle. I’m not sure if the whole “circumference touching centre” thing is a prerequisite for it to be a vesica piscis, but if it is this symbolises a sacred geometry of the second stage of the creation of the Seed of Life, and a symbol of the fusion of opposites and passageway through the world’s apparent polarities.This reading of the fusion of polarities makes some sense as hung on the wall right above the dining table are the words “I will di(n)e for you”, and the opposing chairs each symbolising love and death. Maybe it’s also the fusion of art and dining? 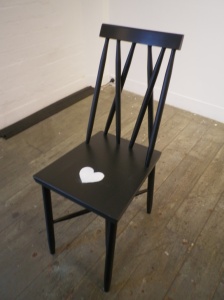 On the walls surrounding the dining table were a cycle of paintings informed by the lavish flower field foreground in Botticelli’s Primavera, also known as the Garden of the Hesperides during the Renaissance.

Seeing Alana’s paintings alongside Botticelli’s Primavera just makes me imagine these mythical creatures of the underworld frolicking amongst the feet of the figures in Primavera.

The Orpheus Diningroom is an extension of her installation back in 2009 called Tormentate i sensi, another temporary dining room that mused on immortality, mythology & epicurean delicacies to tantalise the senses, combined with painting.

The inspiration behind this is the 15th century Florentine philosopher and mystic Marsilio Ficino, who had both ignited the cultural revolution that elevated dining to an art form and elevated the mind and status of a ‘painter’ into the realm of an artist. What an interesting theme to explore in one’s art! I am partly jealous that I didn’t come up with it first!

Putting a dining room in a gallery as an installation, Alana really took on the whole “where to dine is not merely to eat” notion to entirely another level!