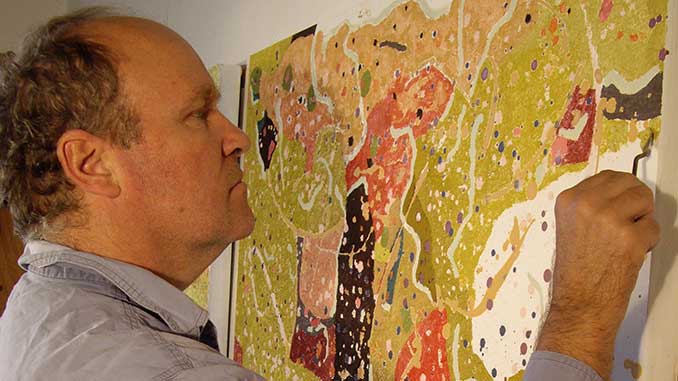 Who is James Yuncken?
I’m a painter, exhibiting for over 30 years now. Always wanted to work in a creative field, but took a while to find my niche. Largely self-taught, but had help early on from friend and then lecturer at Canberra’s School of Art, Christopher Croft, and later I did a couple of Drawing Marathons with Dean of the New York Studio School, Graham Nickson.

What would you do differently from what you do now?
I have qualifications in law, science and computing. I’ve done all those things a long time ago. I’m glad for those experiences, but I wouldn’t swap what I do now for those or anything else.

Who inspires you and why?
I’m inspired by so many people from the past and in the present. Writers, musicians, painters, philosophers, scientists, thinkers and ordinary people: all those who have come across my path and in some way enriched and deepened my perception and understanding of the world.

What would you do to make a difference in the world?
Be Honest, true to myself, true to humanity.

Favourite holiday destination and why?
I have a fascination with places on the edges of the social and political ‘tectonic plates’ that have shaped /are shaping the world in which we live. In the 1980’s I lived in Germany and in West Berlin. In the 2000s’, visits to Greece and Turkey have enlightened me about that very old, but still active divide between west and near east. Most recently my wife’s work in Hong Kong has given me the opportunity to feel the atmosphere there, but also in perhaps the most active current fault line, China.

When friends come to town, what attraction would you take them to, and why?
I like to show them why Melbourne is once again marvelous as it has been at various times in its history. Its gardens, its cafes, bars and restaurants, and the things that have brought what is, I think, a new development – a growing self-confidence and a cultural coming of age.

What are you currently reading?
Not much. This is the busiest and most productive time of my life and I don’t have the headspace to read much more than an occasional newspaper. When I was younger I read a lot, and widely. That ‘homework’, that preparation, was invaluable and is my constant companion.

What are you currently listening to?
I listen to a lot of radio and podcasts. I’m a big fan of the ABC, especially Radio National programs such as Late Night Live and The Minefield. I’m also a fan of Melbourne radio station RRR for music programs such as Woody Mcdonald’s The Cave and Joe Brnadic’s Astral Glamour, but they have a lot of good talk programs too.

Happiness is?
A nice home cooked meal after a hard day’s work, washed down with a few glasses of wine.

What does the future hold for you?
The best is yet to come. The future is both terrifying and exciting!

James’ latest exhibition, Hindsight 20-20: A Melburnian Perspective, is currently on display at fortyfivedownstairs until 5 March 2022.  For more information, visit: www.fortyfivedownstairs.com or www.jamesyuncken.com.au for details.

On the Couch with James Yuncken